In which I rant about Twitter and quoted tweets

I am so annoyed with Twitter’s changes to the quoted tweet that I actually decided to write a blog post about it!

I posted a mild rant on Twitter the other day about the change to quoting a tweet:

What is with the new quote style on #Twitter iOS app? Is quoted tweet an image?? If yes, that’s bad for accessibility.

If you view that link, you will see a long discussion mostly in Danish.

From my other account, @accesstechcomm, I retweeted my mild rant. There, I got a reply from @patrick_h_lauke where he said

it IS announced reasonably using VO (though getting some funky focus/context issues it seems), so not just image

Funky seems to be an inappropriate word to use with a user experience. (VO is VoiceOver, the built-in (built-in!!) screenreader on Apple products.)

It was a relief to find @aardrian’s blog post about the quoted tweet thing as an accidental accessibility improvement. That aspect was also cool to discover. I mean, how many images are floating about on the internet without alt text? Many. Too many. I hoped to drive people to discuss this issue on @aardrian‘s post, but no one took the bait. I finally did, but then moved my entire rant here so as not to upset @aardrian’s delicate constitution!

From @accesstechcomm, I tweeted (twice):

Ditto. Though not so much on my post, but instead on the whole quoted-image-tweet-as-#a11y-aid thing.

@aardrian sent that reply to me (as @accesstechcomm) with the quoted tweet feature as shown in this screenshot from the Twitter web app showing notifications to my account: 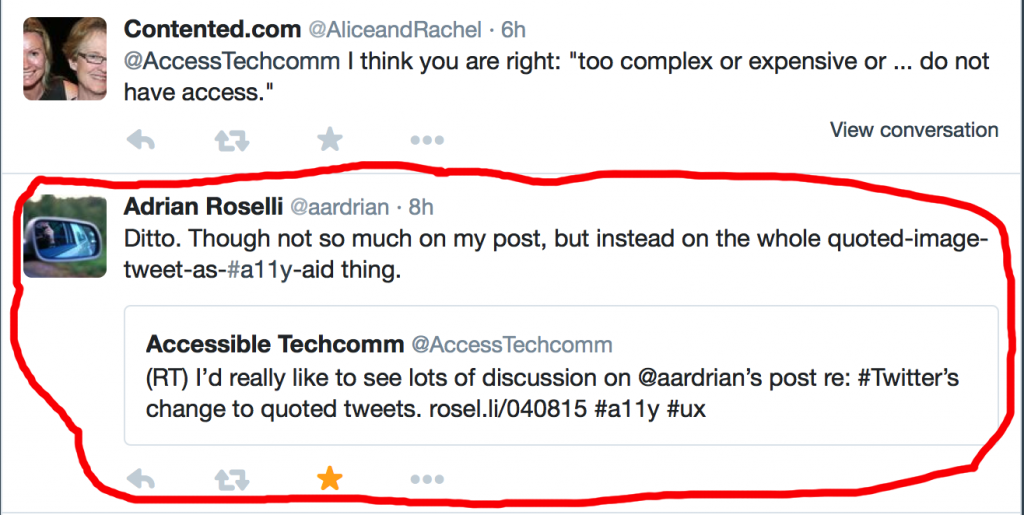 I circled his entire tweet in red. The screenshot includes a later notification tweet from @aliceandrachel to illustrate another point…

I couldn’t see that same tweet at all in my mentions on Hootsuite because my Twitter name was inside that box and therefore not visible to Hootsuite to regard as a mention! The screenshot shows the @aliceandrachel mention, but the @aardrian mention where my Twitter name is hidden inside the quoted section is missing:

Argh!! There are so many things that irritate me about this “enhancement” or “new feature” that I don’t know where to begin.

Oh, and I see it in the notifications section on Twitter on the web, but not in the mentions for the reasons I just, uh, mentioned.

I decided to post a comment on @aardrian’s blog post. I clicked on the link I could see in the quoted part of his tweet. All that happened was that I went to my original tweet. Only then did that URL turn active. Now I could click again! This time, it worked and I arrived at the blog post. Two clicks shouldn’t be bad because you know where you are going, as Jakob Nielsen says. Here, 2 clicks was an annoying pain. I was rudely surprised that my first click didn’t take me to the blog post. Might this be a slight cognition issue in some cases? Readers of “The Inmates Are Running the Asylum” know that the user always blames themself. As in, “I didn’t get to where I wanted to go to, so I must have done something wrong”, and not, “someone coded or designed this poorly and is making me work more and think more”. Bad! Bad Twitter! More ARGH!

I think the idea of being able to add alt text as @aardrian points out is marvelous. Of course, we can all just use the EasyChirp Twitter client on the Web, which now lets you add alt text. @EasyChirp is fixing something that @Twitter should have had in the first place! I have a sneaking suspicion that only sighted people who know what alt text is are thinking like @aardrian is in his blog post. There are millions who are clueless about the existence of alt text and happily tossing pictures of whatever around the twittersphere every day, blissfully unaware of those they are excluding from the discussion or the laugh.

And this morning I discovered this news from Medium: Medium proudly announces the text-shots feature. Ugh. It’s an uphill battle.

Over on my own Twitter account (@kmdk), I complained the moment I saw this quoted tweet thing as I wrote at the beginning of this rant. I often use the quoted tweet feature as a basis for a new tweet. I use part of the original tweet like the URL, a phrase, and/or hashtags, and then I add more to it – classic curation. You can’t do that on Twitter iOS any more. You can (still) curate on the Tweetbot (iOS) app, which I did. Ditto on Hootsuite and, of course, EasyChirp. When I tweeted my complaint, one person told me it was an awesome feature and why would it be a problem. A friend stepped in and said “screenreader”. I was relieved when @patrick_h_lauke said (see first part of this rant) that the screenreader could get at the quoted text, but how does a screenreader get into this text box, which is apparently not quite an image, and I cannot?

Another user pointed out with great concern that anything like hashtags or (as I already mentioned) URLs do not function inside this quoted section. This is where I thought sighted people, especially those working with social media professionally, would get very upset. When searching on a hashtag, these tweets will not appear. Thus, if you use the quoted tweet to quote something from your favourite restaurant with the hashtag #FavRestaurant to win a prize, that restaurant won’t find your tweet when searching for those who retweeted the tweet for the competition. Fans quoting tweets with their fav sports team / movie star / movie / whatever hashtag will not appear in the hashtag search, which can disappoint severely, what with them being fans and all.

I took two screenshots to show the different behaviour of the quoted tweets in two different iOS apps. They don’t have URLs or hashtags, but bear with me. 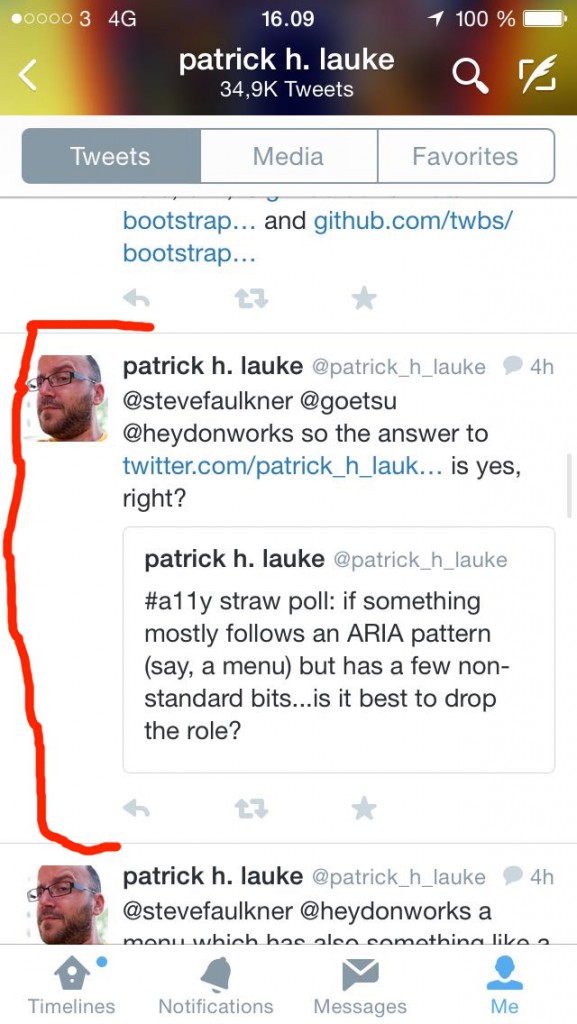 Then I looked at that same tweet on Tweetbot iOS and there is a URL in place of the quoted tweet: 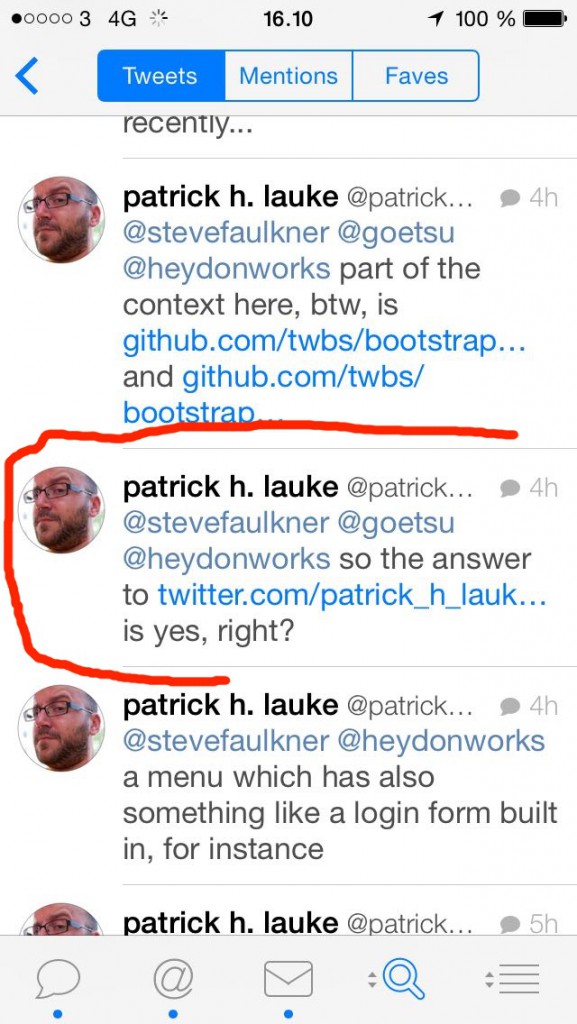 Consistent user experience, anyone? In other words, there is some weirdness going on here that seems to go against the whole point of hashtags and sharing.

My head hurts when I try to figure out the whole alt image thing that @aardrian describes. I mean, if I cannot quote my own tweet with an image, how am I supposed to provide that service, especially on a mobile device? I really have to think a lot to figure out the best way to tweet an image on my own share someone else’s image and get the alt text in there. Again, those who know about alt text may make the extra step. Your average alt-text-ignorant user will not.

I really really really hope Twitter is listening to all this, although I have only read the voices of four people even discussing this issue. I want to see Twitter have their devs and designers walk through the whole process and test with users of all abilities for a change.

PS If you work in tech and haven’t read “The Inmates Are Running the Asylum”, go get The Inmates now from Amazon or from your local library. We must stamp out the apologists!

PPS To counter the negative vibrations in this rant, go visit @marcysutton‘s new Tumblr blog called Accessibility Wins and cheer up a bit.