In 2010, I took lots of pictures and posted them to Flickr. There was a method to my madness: it was called Project 365 – taking one photo a day for one year. The only goals I had were to take one photo a day – and to become more familiar with my little Sony T200 Cybershot. (Yeah, yeah, there’s an instruction manual, but it’s not very user-friendly. I keep planning to write my own version, but I digress….)

The year, or the 365 days, didn’t have to follow the calendar year 100 %, I told myself as I started on January 2. At first, I was very strict with myself about the other rule. I had to take a photo each day. If I was home all day, I would get a bit desperate as midnight approached. The advice you find on the web for this photo-a-day project says to explore your world and your camera. This means you could take a photo of some trinket in your home, or you could take a close-up (macro photography) of some ordinary object so that it became something not so ordinary.

That was a great tip. I took a close-up of some yummy tangerines and (unfortunately) a close-up of some headache pills. Slowly, patterns and colors became more evident to me as I moved around in my world. I also chose to not photograph things I saw. Two lovers holding hands. That sort of thing. I want to respect people’s privacy. I am still not that fast at taking photos, so I couldn’t take a quick shot, and then I’d feel bad about posting it in public when I felt it was something private. Those images are only recorded in my mind, which is fine for me.

My camera became my constant companion. Before, it was always in the drawer at home and never on hand for that perfect moment. Now, I remember to carry it with me all the time. I tried my hand at iPhone photography, too, but the 3G model in my hands requires plenty of light and little motion. I grew familiar with the idea of taking pictures and that was a unexpected benefit. I also reinforced the idea of taking pictures of things for later reference: a poster with concert dates, a whiteboard with scribbled notes. Why write these things down when you have a camera handy?

Storytelling came into play. I guess I couldn’t keep quiet. I took pictures and then I wrote about them. I described the feelings that the scene evoked because there was a tale I had to tell. The Flickr set almost became a blog of my year. Perhaps it was just that – a blog of my 2010.

As time went on, I used my camera more frequently for events and activities, and not just that one photo. I missed some days. Then there was a time when our router was dysfunctional, and I had a backlog of photos. That made me lose the rhythm a bit. Lesson learned: upload the daily photo on a daily basis!

As December 31 approached, I didn’t worry about not having one photo for each day of 2010. I had still gained a lot from my experience.

Visit my 2010 photo-a-day project on Flickr, the project that helped me discover a rainbow on the steps to the metro. 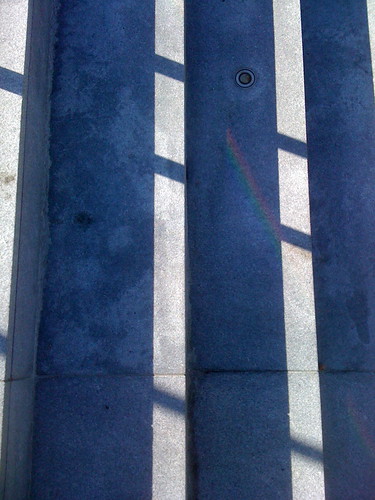